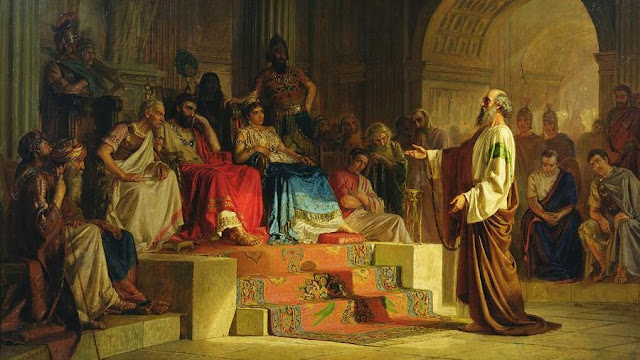 Maccoby's reconstruction of the events surrounding Paul's trial in Jerusalem is quite breathtaking in its scope. This is the stuff of movies, with machinations and intrigue to keep everyone guessing to the very end.

According to Acts Jews from Asia Minor blew the whistle on Paul. Maccoby asserts that these were most likely Jewish Christians who had previously crossed swords with Paul in Galatia and other cities, some of whom would have been at the zealot end of the spectrum.


Such zealots... would be particularly likely to resort to violence against someone like Paul, who was reported to have given up Jewish patriotism as well as reverence for the Torah.

Maccoby seeks to weed out the disinformation from the credible history in Acts, an undertaking not to be taken lightly. Among his suggestions "the possibility that Paul acquired his Roman citizenship only shortly before he travelled to Jerusalem. This was a time in his life when he had a large amount of money at his disposal."

That large amount of money, of course, would be his collection for the poor saints in Jerusalem. Maccoby believes it not unlikely that some of those funds were spent in buying citizenship as insurance against things going badly. He also suggests that Paul kept a slush fund in case bribery was needed.


It may well be that Paul did in fact give Felix a bribe, and so was enabled to live unmolested in Caesarea until the governorship of Felix ended two years later.


It is as if the author of Acts is going out of his way to tell us that Paul did not purchase his Roman citizenship, a possibility which might not otherwise have occurred to us.

Paul's own testimony (at least as it is recounted in Acts 23:1-10) falls a fair way short of the gold standard of honesty as Maccoby sees it.


Most commentators seem to gloss over Paul's duplicity on this occasion. His claim to still be a Pharisee was simply a lie, and if his real views had been known, the Pharisees would certainly not have supported him.

It seems that, for a while at least, the peripatetic apostle is going to slip the net entirely.


Paul had succeeded in escaping from the Jewish Christians, from the Sanhedrin, and from the Romans. He still had one enemy to reckon with, the most deadly of all, the High Priest...

Paul had previously been a creature of the High Priest and "the bureaucratic memory is not short, and Paul would certainly be remembered as the high-ranking police officer who fouled up the Damascus operation so spectacularly and actually defected to the dissidents."

And so Paul is eventually sent off to Rome and martyrdom. Or perhaps not. "We have to admit that Paul was no martyr and was not even notably truthful; he was first and foremost a survivor."


According to Church legend, Paul was martyred in Rome, but no reliance can be placed on this story. It is quite possible that he lived on to a ripe old age...

Chapter 14 goes into more detailed speculation than can be outlined here and, at the very least, is a ripping good yarn. Is it believable? Well, it's just as believable as the upliftingly sanitized version that Acts presents. That doesn't make it true, but it does make it... interesting.


(This is the latest part of a overview of Hyam Maccoby's 1986 book Mythmaker: Paul and the Invention of Christianity. The views of the reviewer do not necessarily coincide with those of the author.)
Posted by Gavin R at 16:07