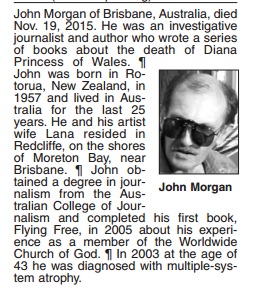 The December 31 Journal has been released and can be accessed in full PDF form online. The Journal chronicles the ongoing saga of individuals and fellowships that have a past history with the now defunct Worldwide Church of God. A brief precis:

- Jim O'Brien, former UCG minister and now the public face of the independent Church of God Cincinnati, is best known for the Winter Family Weekend he organizes. Obviously still a well attended occasion judging from the front and back page coverage. Over 600 attended a Sabbath service during the event.

- An effort to reboot Ray Wooten's group under the new name United Christian Church of God. Wooten died in 2014 and his organization, United Christian Ministries, was 'discontinued'. Wooten was apparently regarded as a congregationalist rather than having the usual hierarchic fixation. With due respect toward the UCCG foundation members, a group of this size seems to fall well below the critical mass for medium to long-term survival.

- In case it escaped your notice the Flurry cult (PCG) has been with us now for 26 long, disturbing years, and the anniversary was celebrated by devotees at spots across the US and Sydney, Australia on December 7. Did Gerry think his 'work' would last this long? Will it endure another quarter century? One thing is certain, Gerry won't.

- In the obituaries section the passing of John Morgan is noted. John was a good guy and a fellow WCG survivor. I'm sure many who knew John during his "Kiwi years" and beyond will wish to extend their condolences to Lana and the wider family.
Posted by Gavin R at 14:10