James Dobson and the flight from autonomy 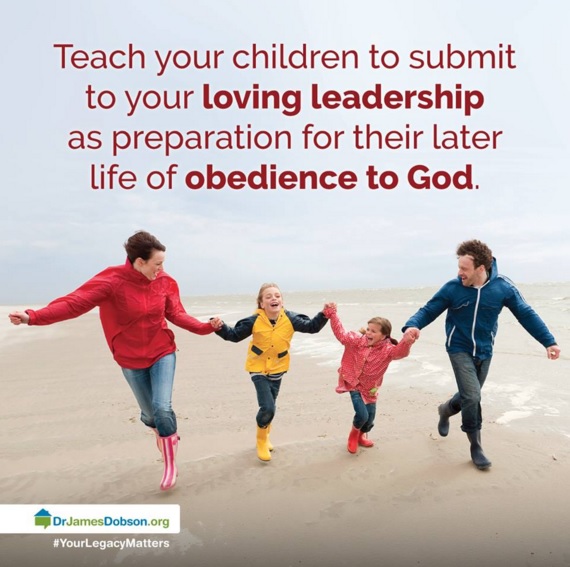 I found this graphic on my FB feed. It seems innocuous but it makes me deeply uncomfortable. Cooperative, friendly kids are a joy, but do you really want them to submit to you without question? The word submission implies coercion. Isn't it one of the great rewards of parenting (and later grand-parenting) to see them, as they get older, start to think things through for themselves and reach outward to their own authentic perspective on life?

The graphic clearly draws a heavy line between submission to parents and obedience to a coercive God. The idea being that for kids their parents stand in the place of God until such time as they graduate into adulthood and God takes over the role, a parent-figure writ large; the Sky Father. God is reduced to a projection, a heavenly father figure, complete with demands for unconditional obedience.

The message here then is one of dependence versus autonomy, and dependence is the favored option.

But even in the Bible there are exemplars that run counter to this cravenness. One time we find Abraham ready to cut his son's throat at "divine command", yet at another we find him arguing with God over the fate of Sodom. Which do you think was his finer moment?

People who find this graphic appealing will be, I expect, big fans of authority; God in his heaven and nasty human beings each in their designated place in the great unalterable scheme of things. Independent, creative people are a threat; and how terrible is it when their kids start asserting some independence and initiative that runs counter to their own precious take on life. In the same way higher education is often viewed with suspicion lest their offspring acquire ideas that clash with their parents' beliefs.

James Dobson sees God - if this graphic is anything to go by - in a way that can only be described as 'legalistic'. Is this anything close to good Christian theology? Does God just want dull-eyed obedience and conformity? Yes, the gospels say something about becoming as little children (Matthew 18:3), but that doesn't have to imply bowing submissively to the whims of a capricious deity (or, more likely, the capricious whims of someone who represents themselves as the authorized representative of Deity). But think about it, kids are curious - if they're not there's something wrong. They ask questions. And they have the potential to adapt and move beyond those of us set in our ways. Surely that's a better way of understanding this verse.

Are your views on things like ethnicity, race and sexuality exactly the same as your parents? Have you inherited all of their political views; their religious affiliation? Do you restrict your vision to their horizons? Do you expect your kids to do that? Part of growing up as a healthy individual is to learn to assert yourself and move out from under the parental shadow. Part of growing up spiritually is dealing with the tough questions about belief, not just shutting your eyes and deferring to the apologists.

Growing into maturity necessarily means growing into independence. Any meaningful relationship to the Otherness which we call God involves questioning and challenge, not passivity. If we get in the way when young people reach this stage, no big surprise if we reap the whirlwind. How many damaged kids come from authority-focused homes?

Naturally it'd be surprising if the next generation didn't adopt many of the values they grew up with, and if they do so with their eyes wide open, that's brilliant. And if not? If they've battled their way through to an authentic place where Mum and Dad never ventured? Then surely that's worth celebrating... their folks have obviously done a great job of real parenting!