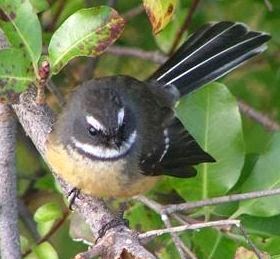 I've been spending some time in the back yard. It's a temporary dalliance that usually occurs at this time of year with the Summer weather and time on my hands. I get to pretend that I have some minor competence with a pair of secateurs, and resolve to take much better care of the section in the months ahead. Not that I'll ever be a gardener, and resolutions have never been my forte. The green thumb genes all went to my dear sister who has, with no exaggeration, a garden to die for... if you care to die for such things. I'm happy to settle for occasionally semi-tidy.

In the process of stomping around and alarming the vegetation, I've picked up a fan. A friendly fantail to be precise. Well, I know it's anthropomorphising (that's got to be someone's word of the week) but the adjective fits. Friendly, inquisitive, bold, curious, full of pep. Intriguing qualities in a little bird that's a good deal smaller than a sparrow. It swoops and flits around, alighting on nearby branches, gives me a good look over, and follows as I move from what I have pretentiously started calling "the breakfast patio" to the Congolese jungle that's been running riot out the back. It's almost impossible not to like the little fellow as it darts about, and the temptation is to engage it in a spot of light conversation. It seems only polite. More on that below.

Reality is a little less romantic. These tiny birds are short-lived - three years is thoroughly geriatric - and in summer they're busy raising one of up to four families, one after another, each with three or four chicks. The mission is to feed all those hungry mouths, which means flying around after bumbling humans like me in the very realistic hope that we'll disturb the insect life, thus pointing the way to the next meal. They also follow larger birds around for the same reason. Shy they are not.

For their size, they're pretty smart too. If a predator comes near the nest, the mother bird will feign injury in order to draw the attacker away from the chicks while Dad does the macho thing, aerial attack. They tend to be fascinated by windows. My little mate likes to get up-close and personal with the ranch-slider. Curiosity means they've been known to make 'flying visits' inside, so when it's around I've been keeping them closed for both our sakes.

New Zealand fantails (Piwakawaka) are a sub-species in the greater family of fantails, members of which are found in Australia, Samoa, Indonesia and, more surprisingly, Pakistan. But why bore you with dry facts. Would you believe that cross-species communication - of a sort - is indeed possible?


You can whistle your way into a friendship with a fantail by learning to talk like them. Fantails speak using a high-pitched sound. It is sort of like a kissing sound. You can create this sound by puckering your lips together, putting your finger in-between your lips and sucking in lightly.

So now you know what I'll be trying tomorrow.
Posted by Gavin R at 09:33