The trouble with Romans 13

The Bible has a lot to commend it, even if we can no longer regard it as infallible and inerrant, and beyond the impious questioning of mere mortals.  A favourite Gospel?  An inspirational voice of prophecy?  A storehouse of wisdom?  A charming novella? Yes!  I could easily make a case for Mark, First Isaiah, Sirach and Tobit (the last two among the deuterocanonical works).  There is indeed a place beyond naive biblicism where the power of these ancient books still works magic on cynical readers in a post-Enlightenment world.  As a cultural artefact, as literature, and as a witness to the faith struggle of those who went before us, this is a corpus that demands not obsequious worship, but simple respect, and I for one resist the call to join in the jabbering chorus of bah, humbug.

But, let's be honest, Mark Twain had a point.


It [the Bible] is full of interest. It has noble poetry in it; and some clever fables; and some blood-drenched history; and some good morals; and a wealth of obscenity; and upwards of a thousand lies.  (Letters from the Earth)

Despite the desire of many well-intentioned scholars to rehabilitate the book of Revelation, for example, sane people find it a noisome bog, a place where many have succumbed to the basest, crudest and frankly stupidest speculations.  Call it the voice of the oppressed as much as you like, it still counts more as 'obscenity' than 'noble poetry'.  D. H. Lawrence summed up it's aberrant virtues better than most.


We can understand that the Fathers of the Church in the East wanted Apocalypse left out of the New Testament. But like Judas among the disciples, it was inevitable that it should be included. The Apocalypse is the feet of clay to the grand Christian image. And down crashes the image, on the weakness of these very feet. There is Jesus--but there is also John the Divine. There is Christian love--and there is Christian envy. The former would "save" the world--the latter will never be satisfied till it has destroyed the world. They are two sides of the same medal.

But what if you were asked to nominate the most disturbing chapter or section in the Bible?  The passage that has been the greatest force for evil, not good.  What would it be, and why?

Most of the passages that spring to mind tend to come from the Old Testament,  and there's certainly an awful lot to object to in the Hebrew canon, not least the famous 'waters of Babylon' psalm, Ps. 137.

Perhaps the concentration camp staff at Auschwitz comforted themselves with such verses.  Yet, in the context of other ancient literature, this is hardly uncommon.  Brutal times draw forth brutal literature, and that includes scripture with its vile "imprecatory psalms".  But not just the Bible. I recollect being scandalised by a passage in the Bhagavad-Gita many years ago, every bit as contemptuous of human life as anything you'd find in the Hebrew Bible.  Viewed as god-breathed holy writ such passages are an abomination, but seen as examples of national literature at a time of robber-baron royalty... not so much of a surprise.
My own nomination, seemingly far more benign, comes from the pen of Paul the apostle:  Romans 13:1-5.

13 Every person should place themselves under the authority of the government. There isn’t any authority unless it comes from God, and the authorities that are there have been put in place by God. 2 So anyone who opposes the authority is standing against what God has established. People who take this kind of stand will get punished. 3 The authorities don’t frighten people who are doing the right thing. Rather, they frighten people who are doing wrong. Would you rather not be afraid of authority? Do what’s right, and you will receive its approval. 4 It is God’s servant given for your benefit. But if you do what’s wrong, be afraid because it doesn’t have weapons to enforce the law for nothing. It is God’s servant put in place to carry out his punishment on those who do what is wrong. 5 That is why it is necessary to place yourself under the government’s authority, not only to avoid God’s punishment but also for the sake of your conscience.

So what's the problem? This is a licence to do nothing in the face of injustice.  More than that, it is a churchly sanction not only to do nothing, but at minimum to give tacit support to evil.  If it had been taken seriously there would have been no American Revolution, no civil rights movement, no overthrow of dictatorships, no emancipation from slavery, no democracies.  In short, no progress.  Adhere strictly to Paul's advice and we'd all still live in feuding totalitarian states, sanctified societies where the church counsels its members to quietism; sit down, shut up and do whatever you're told. 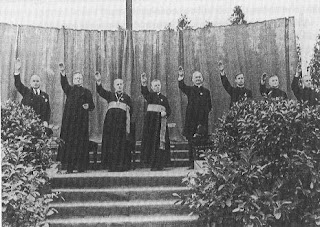 The ideal society of Romans 13 would look a lot like Nazi Germany, or, given its provenance, the Roman Empire.
And yes, it was indeed a popular passage in Nazi Germany.  Did you have qualms of conscience about disappearing Jewish neighbours, conscription into the Wehrmacht, the euthanizing of the mentally unfit?  Go read Romans 13!
From here we move out into the nightmare nonsense of Augustine's two cities and Luther's two kingdoms, the lethal concept of "left hand of God."  Truly this is a very, very long way from the teachings of Jesus.
And we have Paul to thank for it.
The theological games played in much of English-speaking Protestantism have never impressed me greatly, and as regular readers know, I have a deep and irrational loathing of the Reformed variety.  And yet it has been primarily in the grey murk of Anglo Protestantism that slavish obsequiousness to the demands of the state - the Pauline imperative in Romans 13 - has been de-emphasised.  It has been here that non-conformism found a voice, and a prophetic stance against the state made not only possible but acceptable and valued.  If for nothing else one is moved to say, thank God for the Methodists.
Yes, Romans 13 seems patriotically inocuous at first, but read with the standard set of assumptions (sadly, the most natural reading) it brims with the potential for the bitterest fruit of human oppression - authorised and enforced by God.  Paul is not talking about a liberal democracy like Sweden or New Zealand;  his point of reference is the iron grip of Rome.  What was Paul thinking when he wrote "The authorities don’t frighten people who are doing the right thing... Do what’s right, and you will receive its approval."  Did he not know that the Empire had executed Jesus?  The irony is that, according to legend at least, he too was soon to be crushed under the boot of "God's servant."
Surely no thinking person today could accept the implications of this passage.
There may be other ways of reading the five verses.  But even if Paul (assuming Paul did write them, and it's not an interpolation) was talking about something other than the obvious, that would not erase two thousand years of damnable precedent.
Two thousand years and counting.
Posted by Gavin R at 12:56