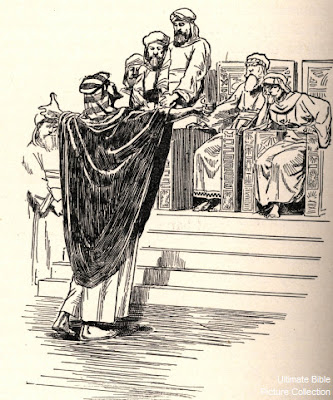 Those of us who have come out of a fundamentalist background tend to associate Old Testament prophets like Isaiah, Jeremiah and Micah with prediction. In certain circles, those predictions are not only inerrant but aimed at our own times which are declared to be the End Times. Prophecy, we were told, comes alive in today's world news.

To illustrate this bit of myopia, here's a quote illustrating this perspective.

I'd don't know where the author pulled his stats from - though an anatomical explanation may be apt. This particular 'expert' then goes on to shoot himself in the foot by adding;

In more enlightened circles this is all old hat. Of course the prophets weren't talking about today, they were forth-telling, not foretelling, and so on.

The trouble is, those circles of enlightenment are set on a very narrow beam, and they've yet to pierce the darkness down the road at the neighborhood church. The almost complete lack of "trickle down" to the pews is a major failing of modern biblical studies.

So what were the prophets on about? It's not saying anything original to suggest that they were more often than not the political activists of their day. Many of the soaring passages in Isaiah are not only reminiscent of political rhetoric, they are political rhetoric. Did Jeremiah have a political agenda? You bet! You don't have to read very far into the prophets without this reality leaping out at you. You're not always reading sublime spiritual insights; sometimes it's more Martin Luther King, other times it's just a Donald Trump speech.

From the very beginning of modern study of these figures it was evident that their messages had a strongly political content.

Not so evident to the good folk who watch Tomorrow's World on TV, or trawl through the shelves on 'prophecy' at their local Christian bookstore.

In the course of this engagement with a specific set of political judgments and policies they [the prophets] clearly intended to influence the policies adopted and thereby the outcome of events.

Of course, there is poetry and theology in the Prophets. They wrote in a world where there was little separation between secular and sacred, no concept of democracy and no political parties. If you wanted to beat the king over the head for his questionable alliance with Egypt which is, after all, a very political thing to do, you picked up the club of prophecy, gathered your mantle about yourself, and whacked him with a word from the Lord.

There is apocalyptic writing as well, which does present itself as peering through the mists of time (usually with the advantage of hindsight!) but this is largely a niche genre restricted, in the Old Testament, to the book of Daniel.

The incredible thing is that so many Christians, invariably good people with fine motives and an unquestionable commitment to their faith, are still being led down the garden path by the manipulations of modern prophecy pedlars with their arcane calculations and lurid fantasies about what will happen sometime very soon (and would you please send in your generous tithes and love offerings so they can raise the alarm!)