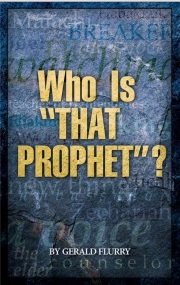 In case you missed it, Dave Pack is now claiming to be "that prophet" of John 1:21-25 (KJV). That's contrary to what he's said in the past. Why the sudden about face?

If you're wondering who Dave is, stop reading now, it's complicated and you might want to spare yourself a headache. It also involves a detour into the convoluted world of Armstrong splinter sects.

What, you're still here? Don't say I didn't warn you.

David C. Pack is the imperious leader of the Restored Church of God based in Wadsworth, Ohio. Before we deal with Dave, though, we have to mention Gerry. That's Gerry Flurry, alias "that prophet". Gerry has been the self-appointed title-holder for a lot of years in his role as undisputed leader of the Philadelphia Church of God. He's even written an eight chapter booklet about it.

But Gerry is getting long in the tooth. He's seen better days. He may even beat Rod Meredith into a padded casket. With him dies "that prophet" as far as the PCG is concerned. Inconvenient!

Everything clear so far? Even if you've never heard of these dudes before, believe me, they're legends in their own teatimes.

Now Gerry does have an heir, his boy Stephen. It's something of a family business in the same sense as the Billy Graham Evangelistic Association. But Stevie can't possibly be "that prophet", it's a one-off appointment and Dad has already snatched that honour.

So what happens when Gerry goes the way of all flesh? There's a problem. Stephen will inherit the overall leadership mantle from Dad, minus the prophet title, but even then there's a question as to whether he's got the chutzpah to fill the role. I'm no prognosticator, but if I was forced to take a punt, my guess would be that Stevie wouldn't last a tribulated three and a half years in the big chair.

Could this be the backdrop to Dave Pack's sudden claim to be "that prophet" (as well as 'Elijah', but who's counting?). Both men appeal to a similar demographic in the ghetto-world of Armstrongism. If PCG hits the rocks, the scavengers will come from near and far.

For PCG members who are convinced that someone claiming to be "that prophet" is a necessary precursor to the End, Dave will now be the first cab off the rank. Fiendishly clever.

If this is Dave's intention, there are at least two big problems with this strategy. The first and most obvious is that Dave, who isn't a young man, will inevitably have to meet his maker too, which just defers the "that prophet" problem a few short years into the future at most.

The second is that all the blather around "that prophet" is the result of a King James mistranslation. The text actually just says "the prophet". In the narrative context (context, what a revolutionary thought!) John the Baptist is conceding that reference to Jesus.

Regardless, PCG members might like to keep their eyes on the skies; vultures are expected.
Posted by Gavin R at 15:35