Would you give your kids this book? 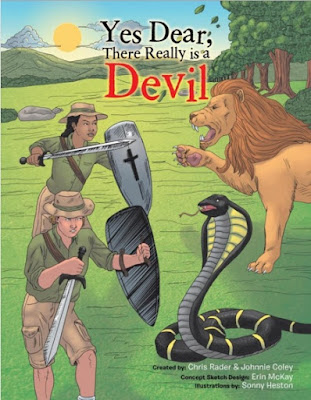 James Pate has been clearing out a mountain of book reviews on his blog. One caught my eye, a children's picture book with the title Yes Dear, There Really is a Devil. James gives it a kind review.


I was curious as to how a book would explain spiritual warfare to children, in a manner that they can understand... Overall, the message that they were trying to communicate was that we should make right choices, that God loves us, that the devil wants to disrupt our peace and joy, and that we can overcome the devil’s temptations by depending on God.  These are good lessons.

I've got to admit, I took a double take. The devil? Satan, Shaitan, Ahriman, Lucifer? Seriously??

My first reaction is that anyone giving their children this as a gift would be committing a form of child abuse. It's not that kids should be wrapped up in cotton wool. There is tragedy, injustice and pain out there in the world they're growing up in. There is exploitation, poverty and bigotry. These are indeed real forces to be overcome. But a personal devil? Not only is it a trivialisation, it puts the onus back on guilt-laden individuals and redirects people of good will away from working for systemic change.

It's here where I definitely part way with the literalists. Satan, as commonly portrayed, is an import into Judaism from Persian religion, from where 'he' was subsequently mainlined into Christianity (those magi - the wise men in Matthew's birth narrative - were probably Zoroastrian priests). John Milton did a great job of tying up the loose ends and slotting the Ultimate Bad Boy into Protestant meta-narrative with his brilliant Paradise Lost. Holy Heilsgeschichte! It's great literature and fantastic poetry, but theologically it's a pastiche. A thousand imitators have followed, not least Ellen White in The Great Controversy. Reality check: if God is indeed omnipotent, there is no Che Guevara-style fallen archangel tempting ten-year-olds to raid the cookie jar.

Satan is a rebel, a revolutionary with ideas above his station. That's a useful portrayal for those who, down the centuries, have been defenders of the status quo. God is on the side of Kaiser, the Tsar, the Emperor, the King. Just look what happens when people start questioning the proper way of things!

No dear, there really is no Devil. But sit down and let's talk about what we can do to make our world a better place.