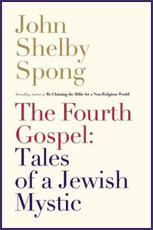 I've been reading John Shelby Spong's recent book The Fourth Gospel: Tales of a Jewish Mystic. The now retired Episcopal bishop has long been a thorn in the side of conservative believers, and this attempt at reframing the fourth gospel will do little to change that perception.

Spong has a talent for using scholarship in the service of pastoral goals. Here he sets out to rescue John from it's anti-Judaic reputation, and it's near-docetic Christology. The solution proposed is that John was a highly creative Jewish mystic. Many leading characters in the Gospel (Nathaniel, Nicodemus and others) are fictive and symbolic. We make a huge mistake Spong contends when we approach John with assumptions that it contains literal, historical information.

While the author is no mythicist, his mysticism occasionally laps on those shores. The gospel writers built their narratives around stories from the Hebrew Bible. One minor example; the swaddling clothes reference in Jesus' birth story in Luke (2:7) is sourced from the deuterocanonical book Wisdom of Solomon (7:4-5). Swaddling cloth made out of whole cloth if you like.

The dependence of the gospel writers on the earlier scriptures and their re-crafting of those earlier narratives seems to be well established, and it's great to see that 'out there' for a general readership. When it comes to imbuing those same stories with multiple layers of skillfully crafted meaning, Spong is less convincing. If this was the case then John floated above the literary comprehension of his own day, encoding insights that were to remain opaque for centuries to come.

The Fourth Gospel promotes a form of progressive Christian apologetics, replete with buzzwords (wholeness, universal consciousness, radical humanity). It's well intended and better thought through than most apologetics at the conservative end of the spectrum, but it still boils down to wishful thinking. We are presented with a Jesus (channeled through Spong's John) in the image of his more enlightened, educated twenty-first-century admirers; the Jesus they would like him to have been. Alas, I doubt he was anything like that.

Still, this is a book that contains some interesting insights. Ultimately though it isn't really about John's gospel. It's about an updated version of the Christian faith that makes sense for believers who have moved beyond fundamentalist and so-called evangelical belief.


Faith does not, cannot and will not give us peace of mind, security and certainty. Faith gives us only the courage to put one foot in front of the other and to walk into tomorrow with integrity even though we know that in this world there is no peace of mind, no security and no safety.

No argument from me.