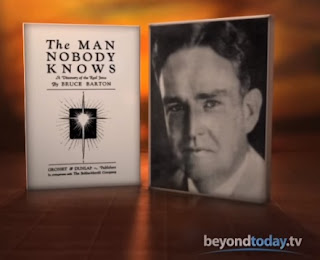 The current issue of Word & World (Winter 2016) has an editorial by Frederick Gaiser called The Malleable Jesus. It's a reminder that your Jesus may not be mine. Being a church publication (out of ELCA's Luther Seminary in St Paul, Minnesota) Gaiser is obligated to find a silver lining, and I can't say I blame him, but the unpleasant fact remains that we tend to create Jesus according to our tastes.

But who is the “historical Jesus,” the one sought by various “quests” of recent time? He is related to the Jesus of the “Jesus Seminar,” who seems to have spoken remarkably little, unlike the Jesus of some editions of the King James Bible, who somehow spoke in red letters.

I'd almost forgotten Bruce Barton's Jesus. He was referred to in various editions of a certain Bible correspondence course which some readers will remember. Barton's actual views weren't touched on, but the name of his book, The Man Nobody Knows, was used to great apologetic effect. (The ever-original Darris McNeely cribbed the same trick in an episode of Beyond Today.) What was Barton on about? Gaiser gives details.


So, who is this malleable Jesus? Perhaps most odd is Bruce Barton’s The Man Nobody Knows, the title of his 1925 book. Upset by the sissified “Sunday school Jesus,” “a physically weak, moralistic man, and the ‘lamb of God,’” Barton describes Jesus as “the world’s greatest business executive” who was nothing less than “The Founder of Modern Business,” the strong masculine man “who created a world-conquering organization with a group of twelve men hand-picked from the bottom ranks of business.” 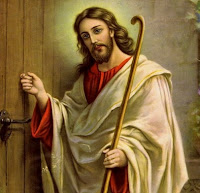 You can see how this 'hard' image of Jesus might appeal to an ambitious 1930s advertising salesman turned evangelist. Barton has a lot to answer for. Somebody should tell Darris.

Gaiser spends some time (not a lot; the editorial is only a two-pager) mulling over various artists' impressions of Jesus. Now there's a study in kitsch. Thanks to really bad artwork hanging in the 'sitting room', I grew up with the door-knocking Jesus imprinted on my mind ("behold, I stand at the door and knock"), looking a bit like a zoned-out Jehovah's Witness. Even then I thought it was pretty awful. I'm sure Barton would have concurred.

There's something to be said for iconoclasm.