The Missouri Synod continues in its relentless quest to give all Lutherans a bad name. This time its target is Doreen Pawelk,  a 92 year old woman who wants to be buried next to her husband. In fact the plot had already been paid for.

News of the elderly woman's treatment went viral after a letter upbraiding Mrs Pawelk for not taking the eucharist at a legalistically-determined frequency was released by family. A huge negative reaction led to a backtracking by Synod leaders and local pastor, LeRoy LaPlant. It was, so they now say, all a big mistake.

What clearly isn't a mistake is the existence of a nasty form letter saturated with a spirit of legalism that would take the breath away from any real Lutheran - or any decent person from whatever religious or non-religious background. Even if this was the 'wrong letter', it has clearly exposed the unpleasant side of the already famously narrow LCMS mindset. Adding insult to injury, this is a form letter that, despite its tone and gravity, can be churned out without the need for the pastor, or any congregational official, to as much as dignify it with a signature.

Of course there's a simple solution. In Minnesota there are a lot of ELCA Lutheran churches. I'd bet the farm that none of them have "self-exclusion policy" like this. 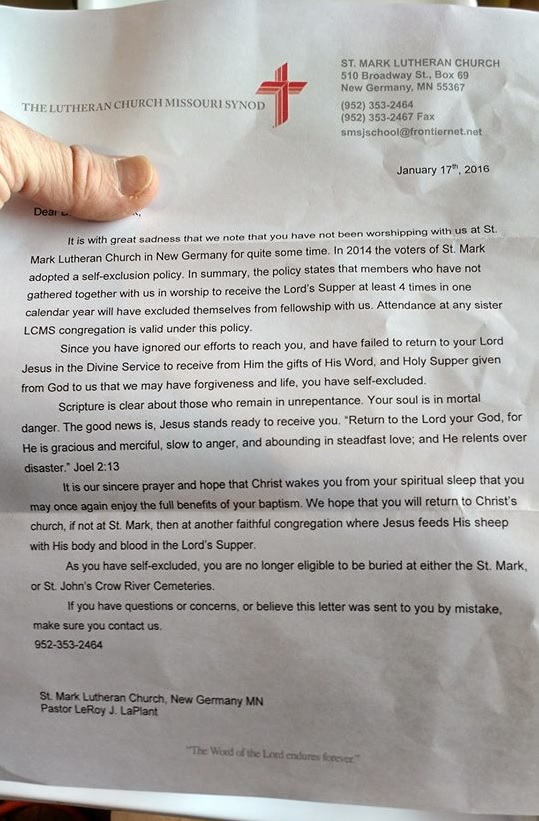