The Bible with Typos

Every now and again I get careless and something comes out all wrong on the blog. Misspelling Brant Pitre's name in the previous post, for example (now fixed). It's nice to know I'm not the only person to goof up. Even Bible publishers can get it very wrong. Some early examples. 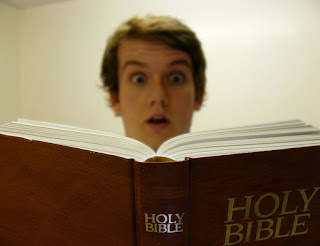 The Bug Bible.  Coverdale's 1535 translation.  Psalm 91:5 reads:  "Thou shalt not nede to be afrayed for eny bugges by night."  A handy promise that, if true, would mean no more need for insect repellent.

The Fool Bible.  An edition from the reign of King Charles I where Psalm 14:1 reads:  "The fool hath said in his heart there is a God."  Perhaps it could be rechristened 'the Richard Dawkins version'?

The Wicked Bible. The best known of the bunch, printed in 1631. Exodus 20:14 reads "Thou shalt commit adultery."

The To Remain Bible.  A proofreader at Cambridge wondered about the placement of a comma in Galatians 4:29.  A helpful editor pencilled in "to remain" in response.  Nobody explained this to the printer.  The verse reads: "persecuted him that was born after the spirit to remain, even so it is now."


Source:  "Bibles: some specially named editions" in the 18th edition of Brewer's Dictionary of Phrase and Fable.
Posted by Gavin R at 23:19