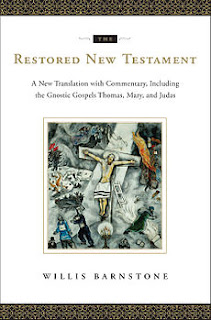 Willis Barnstone is well known for his work on - for want of a better term - "near canonical" documents. His The Other Bible is a wonderful compilation of the strange and the almost familiar; Gnostic, Mandaean, Manichaean and other pseudepigraphic texts. He has also collaborated with Marvin Meyer on The Gnostic Bible.

So what happens when Barnstone breaks out of his field of specialisation to translate the canonical New Testament? Drum roll please...

The Restored New Testament is different. It has an abundance of commentary and supporting essays, and it includes three Gnostic Gospels: Thomas, Mary and the recently discovered Judas.

Barnstone steps outside the standard translator's paradigm in two further ways. Much of his New Testament is rendered in poetic form rather than prose. He also trades in the standard English personal and place names we're all so used to for original-language equivalents. Taking the Aramaic origins of the New Testament seriously - in oral tradition if not written form - Jesus is Yeshua, Israelites are Yisraelis, Pharisees are Prushim. You might think that this wouldn't work, but it seems to. These names are obviously more authentic, but their unfamiliarity to modern English readers also helps to restore a 'rawness' that is missing with the constant over-familiarity we have with traditional renderings. Here's the first three verses of Yohanan (John) 3.


Now there was a Parush named Nakdeimon, a leader of the Jews. He came to Yeshua at night and said, "Rabbi, we know that you came as a teacher from God since no one can perform these wondrous signs if God were not with him."
Yeshua answered,


Amain, amain, I say to you,
Unless you are born from above
You cannot see the kingdom of God.

This is a literary translation in a similar sense to Robert Alter's work with the Hebrew Bible. Barnstone writes:


I undertook a new translation of the New Testament to give a chastely modern, literary version of a major world text... On all questions of faith versus fact, I take a neutral stance...

Barnstone's work is quite a contrast to the translations spewed forth from the American Evangelical establishment. It deserves to be taken seriously. Whether it will may be less certain. Barnstone is generous in his praise of Richard Lattimore's 1966 translation, yet this New Testament has slid into obscurity, buried under a mountain of cheap, trash translations designed to be acceptable to the largely naive Bible-buying public.