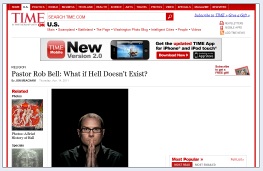 There's a balanced and enlightening piece on Rob Bell on the TIME website. Bell is heavily influenced by N.T. Wright - and yet he talks good sense. A further influence is C.S. Lewis - but that he clearly shares with half of evangelical Christendom. More telling is the fact that John Piper has taken up the cudgels against him, which probably only reinforces the perception that Piper is a reactionary Reformed jerk.

I'm currently working my way through Love Wins - such depth for such a light writing style! 100% agreement? Not likely. Recommended anyway? You bet!
Posted by Gavin R at 10:57