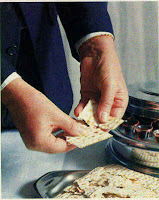 Some churches celebrate the Lord's Supper (or Eucharist) quarterly, others once a month, some each week. Very few do so on an annual basis, but that's the tradition in the offshoot of Adventism known as the Church of God (Seventh Day). It's also a tradition that has been adopted by most of the bodies that emerged from COG7, included among them the followers of Herbert Armstrong.

In my misguided youth this was my adopted heritage. One thing I can certainly say; when you celebrate the Lord's Supper as a Christian Passover, and do so only once a year, it becomes a major item on your calendar.

Gary writes about his experience on the Banned blog. Gary, unlike myself, was at the beating heart of the Armstrong Empire in Pasadena. Some of the things he alludes to (not having your sins forgiven if you didn't participate, for example) were not part of my experience. Auckland was on the far periphery, which was probably just as well.

I do remember the snapping of the matzos, and long readings from the Gospel of John. There was no Lent of course, but the admonitions to "examine oneself" before taking the Passover emblems were a big deal. Footwashing - based on a literal reading of John 13 - was a particularly uncomfortable part of the service, and there was an almost audible sigh of relief as the women and men trooped back from their respective side rooms to finally take the emblems of wine and unleavened bread.

Strangely enough, Passover (the Christianised version) was one thing I missed after separating from the one not-so true church. Not the Day of Atonement, not the Feast of Tabernacles or Trumpets... but Passover. Despite that, I know exactly what Gary means when he rails against the control, the hypocrisy and the culture of contempt that surrounded it.

Today (April 18) is Passover, and the service was held in a variety of Churches of God yesterday evening (following the tradition that a day begins at sundown.)  The following week - through till the 25th - are known as the Days of Unleavened Bread. May these be rewarding days for all so involved, and a token of liberation (surely one of the underlying themes of the original observance!) for those who have since moved beyond such customs.
Posted by Gavin R at 16:38