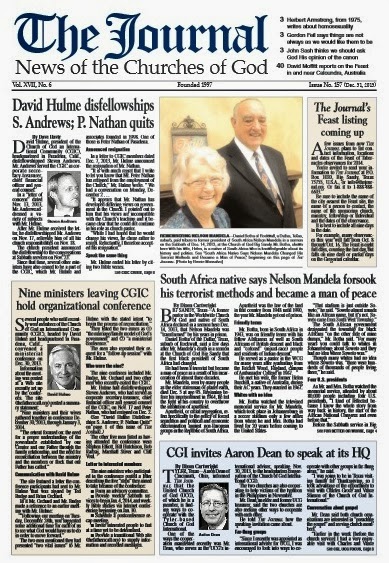 Dave Havir, in a major article in the latest issue of The Journal, provides details of events leading to the crumbling of David Hulme's splinter group, CoGaic (or CGIC, the acronym Havir prefers). The role of Steven Andrews, former general counsel and chief financial officer to the group is emphasised. Andrews appears to have precipitated the crisis with a letter to Il Duce in November in which he challenged Hulme's autocratic leadership style and openly questioned whether it complied with the sect's legal obligations: "under California law, the board of a Nonprofit Religious Corporation is the highest authority for the organization. No particular board member, including its Chairman, enjoys sole authority, and the authority of the officers of the corporation is subordinate to that of the board acting as a body."

Within ten days Andrews had been disfellowshipped, and (my interpretation of what followed) emboldened by the incident, the drooling ministerial pit-bulls began to bare their teeth at the hand that fed them.

The article includes a photograph of Hulme's house on Marengo Avenue in Pasadena, which also serves as church HQ. How convenient.

Il Duce was unwilling to respond to editor Dixon Cartwright's requests for comment.

Yes folks, if you ever wondered why The Journal remains a significant publication for the COG/ex-COG community... well, here's your proof.

Also in this issue:


And of course, this issue is downloadable. The editorial content is priceless. The advertising section is, well, I guess it pays the bills. You can subscribe to the print edition for a modest price - details here.
Posted by Gavin R at 10:11