The Man who (literally) Pulled a Religion out of a Hat 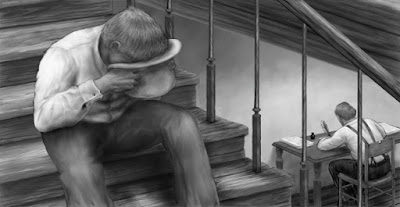 Previously I've noted a number of parallels between the Church of God and the Latter Day Saint traditions. One post on that subject, Cross Pollination: The Community of Christ and Grace Communion International, continues to turn up via search engine hits quite regularly, even though it dates back to 2011.


Mormonism isn't much of a concern on this blog. The various Latter Day Saint groups exist in something of a hermetically-sealed chamber among Christian groups - as do the Armstrong sects. In many ways it's an exemplary community which cultivates an aura of family values and wholesomeness. Mormons shouldn't have to deal with bigotry from outsiders, often based on misinformation.

But legitimate criticism from "within the camp" is another thing. It was fascinating to come across just such a critical examination of LDS claims by member Jeremy Runnels (though that might not be for much longer, he's being hauled before the elders next month). Sadly, it's no surprise when church organizations react with denial and punitive sanctions, as many of us already know from bitter experience.

People in all traditions have to face up to unpleasant facts when it comes to the sanctifying mythology their leaders promote. Lutheran pastors for a long time told heroic stories about the Reformer, but ignored both his complicity in antisemitism and belligerent stance during the so-called peasant's revolt. Many still do. Moving into more familiar territory, Herbert Armstrong's autobiography has been described as a heavily creative retelling of events, a nice way of implying that he told an awful lot of self-serving porkies.

Herb was apparently a thorough amateur compared to Joseph Smith.

If you feel like peering over the back fence (as opposed to into your hat) at the issues your Mormon neighbours are confronting - or should be confronting - have a look at cesletter.com. The document itself is a substantial PDF, but has excellent graphics and is written in a very approachable style. It is available here.

If the title of this post seems a bit cryptic (the artwork gives a clue) you'll soon see why I chose it.

If you even read half of the CES letter, you may know more about the LDS back-story than most Mormons.