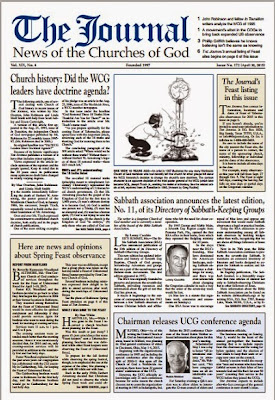 The latest Journal takes readers on a time trip back to 1995 when In Transition published a critique of the drive for doctrinal change in the then Worldwide Church of God. Twenty years later it has been updated slightly. For those of us who were out of the loop at that time it promises to throw additional light on the period of turmoil that saw the dissolution of one of the twentieth century's more fascinating sectarian movements.

Elsewhere Mac Overton reprises a 1979 episode of the TV series Lou Grant which featured a thinly disguised version of the WCG in its plot. Already faithful adherents of the various Churches of God are planning for the "Fall Festival" (actually a Spring festival here in the Southern Hemisphere) we know as the Feast of Tabernacles, and The Journal has begun listing the sites. It also reports that some enthusiastic souls want to introduce an expanded version of the Days of Unleavened Bread as a kind of FOT parallel. 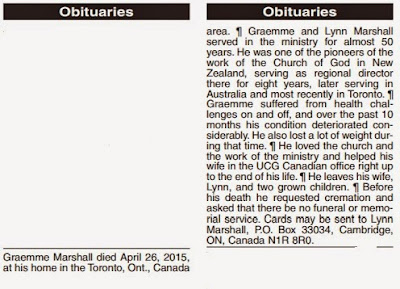 Graeme Marshall, the original Regional Director for the WCG in New Zealand, is listed in the obituaries section. I remember Marshall for a visit to my parents' home in Hamilton when, as a teenager, I was just a "prospective member" considering baptism. Marshall was well regarded by many Kiwi brethren. He died April 26.

You can access a PDF of this issue online.