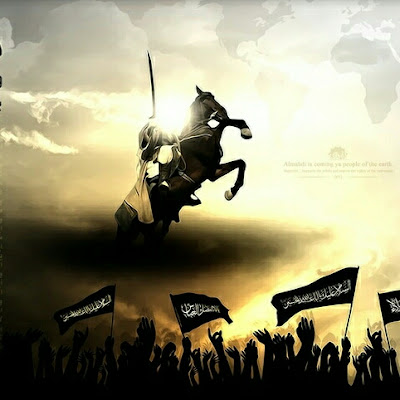 Another BBC radio podcast that's well worth taking the time to listen to concerns the Islamic understanding of prophecy and the Last Days.

Bizarre End Times scenarios are by no means restricted to Christian millennialist sects. Islam swallowed a heady draught of apocalyptic in its formative years, courtesy of early Christian chiliasm, and brought forth its own bespoke eschatology. Most of us outside the borders of Islam have very little awareness of what these beliefs involve.

The BBC's Beyond Belief programme recently brought together representatives from both Sunni and Shia backgrounds in Britain to discuss the End Times and Islamic belief. The parallels to fundamentalist and Adventist teachings are quite remarkable. The return of Jesus, the hidden Mahdi, the anti-Christ; even the significance of a black flag in Muslim prophecy.

The podcast is half an hour in length, and an easy way to be pushed up the learning curve when it comes to understanding the influence of apocalyptic on Islam, and its contrasts and convergences with the more familiar Christian variety. More so because the information is coming directly from Muslims rather than outsiders.