This is the sixth in a series on obscure Bible translations. I've restricted the candidates to those I've been able to personally acquire and examine. 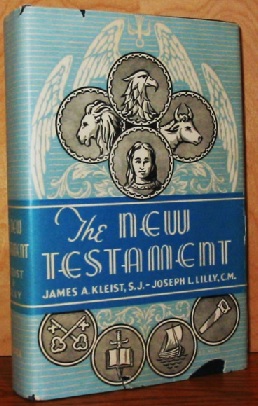 Catholic Bible translations are invariably more interesting than those of the run-of-the-mill kind. For a start they usually sound good when read aloud. This is, after all, the way they were received in ancient times when the common folk who gathered in synagogue or Christian assembly were largely illiterate. Many modern translations are tone deaf to this reality. Those traditions which retain formal lectionary readings are more authentic to this original practice.

And then, with an occasional hiccup in deference to dogma, Catholic translations tend to be more scholarly than the more popular offerings dominating the evangelical marketplace. Vatican II had something to do with that.

But there are also the pioneering Catholic translators like Ronald Knox, producing brilliant work well in advance of the impetus from Vatican II. Among these hardy souls were James Kleist and Joseph Lilly whose New Testament first saw the light in the early 1950's. Kleist was responsible for the gospels, Lilly for everything else.


By the time the feast was half over, Jesus went up to the temple to teach. The Jews were puzzled, "How is it," they said, "that this man is able to read? He has had no regular schooling!" In explanation, therefore, Jesus said to them: "My teaching is not my own invention. It is his whose ambassador I am. Anyone in earnest about doing his will can form a judgment of my teaching, to decide whether it originates with God, or whether I speak my own mind.

It's a good, clear translation that still reads well sixty years later, though long since superseded by more ambitious projects like the New American Bible.


Earlier entries in this series:
The New Testament: A New Translation and Redaction by Norman A. Beck (Fairway, 2001)
The New Testament in the Language of Today by William F. Beck (Concordia, 1963)
God's New Covenant: A New Testament Translation by Heinz W. Cassirer (Eerdmans, 1989)
The Translator's New Testament (The British & Foreign Bible Society, 1973)
An Expanded Paraphrase of the Epistles of Paul by F. F. Bruce (Paternoster, 1965)