This is the fifth in a series on obscure Bible translations. I've restricted the candidates to those I've been able to personally acquire and examine.

Norman A. Beck. The New Testament: A New Translation and Redaction. Fairway Press, 2001. 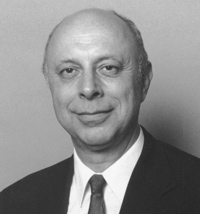 Where William Beck translated the NT from a conservative Missouri Synod perspective in the 1960s (see the previous entry in this series), Norman Beck did the same thing in 2001 from a progressive ELCA background. Both might be Lutheran pastors, but they achieved very different things.

Beck is a professor at Texas Lutheran with a Ph.D from Princeton. His is a "functional equivalence translation" that attempts to depreciate anti-Jewish polemic along with whatever relegates women to a subordinate status. "Therefore, the most viciously anti-Jewish and the most blatantly sexist segments are printed in small-print form in this translation." (p.4)

The books of the NT have also been put in chronological order, though that obviously involves a degree of guesswork. First up is 1 Thessalonians, and 2 Peter takes the caboose position.

Beck also provides an alternate four year lectionary for those churches that have a regular cycle of readings.

This then is a NT that stands out in a crowd.

My first observation is that Beck isn't afraid to acknowledge the racism and sexism within the NT rather than tie himself in knots with an apologetic of denial. That's a good thing. Beck's main strategy has been to reduce the impact of these texts by reducing font size and encouraging us to read over them. While this may leave many conservatives spluttering, it isn't unprecedented. Even the Bible Society has been known to do just this, but using the criteria of relevance (with the "boring bits".) Most of the OT book of Numbers, for example, gets this exact treatment in various editions of the RSV and New English Bible, though they didn't venture to try it in the NT. 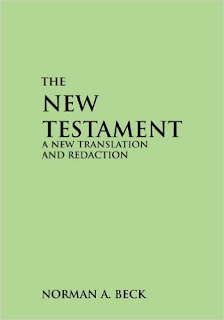 But the proof of any translation is in the prose. How does it stack up?

A sample from 1 Timothy 2: 8-12 (the second section follows Beck's decision to place verses he finds objectionable in very small print.)


Therefore I want the men to pray in every place, lifting up their consecrated hands without anger or dispute. Likewise, I want the women to adorn themselves in respectable clothing, with modesty and decency, not in braided hair and gold or pearls or expensive garments, but to express themselves through good works, which is proper for women expressing reverence for God.

It is my personal opinion that a woman should learn in silence, with respect for the authority of others. I personally do not permit a woman to teach a man nor to exercise authority over a man. I want a woman to express reverence for God in silence.

There are, needless to say, a lot of passages in John's gospel that have been relegated to small size due to unflattering references to Jews, the two longest being John 8: 37-59 and 19: 4-16.

Unfortunately the book suffers from poor choices in design, layout and font, essential factors in readability. It's these factors, rather than the laudable attempt to redress issues of polemic, that limit its appeal for me. A professional publisher would have done a far better job, giving it a longer life in print. Currently only available second hand.