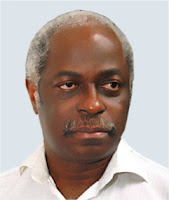 Many readers of this blog would be loath to take advice from a Nigerian pastor on the subject of tithing.

But Femi Aribisala may make you think again.

This gentleman "is currently an iconoclastic church pastor in Lagos." He has a Ph.D in International Relations from St Catherine's College, Oxford.

When it comes to the practice of tithing he pulls no punches. Check out his article "Every Pastor Who Collects Tithes is a Thief." Here's how he concludes his piece.


Tithing was only applicable to Jews and to the land of Israel. When large populations of Jews lived in Babylon, Ammon, Moab, Egypt, and Syria, these lands became tithe-able lands. However, tithes were not acceptable from strictly Gentile lands. So you need to ask your pastor how come he is collecting tithes in Nigeria.

Servants or slaves who worked on the land did not tithe because the land did not belong to them. Since only agricultural and animal resources were included, a fisherman gave no tithe of his fisheries. Neither did a miner or a carpenter pay tithes, nor anyone from the various professional occupations. So if you are not a farmer or a keeper of livestock, tell your ... pastor tithing is biblically inapplicable to you.

Moreover, the only people authorized to receive tithes were the Levites. (Hebrews 7:5). So if your Pastor is a “tithe-collector,” ask him if he happens to be a Jew. Remind him that, even though a Jew, Jesus could not receive the tithe because he was not from the tribe of Levi but from that of Judah.

The trick, of course, is for pastors today to claim we are “Levites.” If your pastor is one such dissembler, ask him if he lives as a Levite. Remind him that Levites had no land and did not have private property. Ask him also how he knows he is from the tribe of Levi, which happens to be one of the lost tribes of Israel. Point out to him that even Jewish rabbis don’t claim to be Levites today because all Jewish genealogical records were lost with the destruction of the Temple in AD 70, ensuring that it is no longer possible to ascertain the true identity of Levites.

Therefore, if Jews no longer tithe because the Levites are a lost tribe, how can Christian pastors collect tithes when we are not even Jewish, how much more Levites? If Jewish rabbis, whose terms of reference remain the Old Testament no longer collect tithes, then pastors who insist Christians are under a New Testament have no business doing so.

The conclusion then is inescapable. Every pastor who collects tithes is nothing but “a thief and a robber.” (John 10:1).

The last time I read anything as direct and unflinching as this it was Ernie Martins "Tithing Fallacy" booklet.