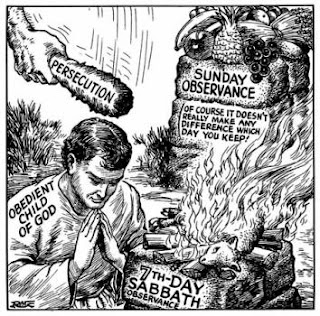 Seventh-day Adventism has a lot of baggage, but shush, it's impolite to mention it in the same breath as SDA and Republican hopeful Dr Ben Carson. The Sabbath persecution complex is a prime example. The time is a'coming when the nasty Catholic church will enforce Sunday observance. Lo, the Mark of the Beast. That's what SDA prophetess Ellen White taught, and apparently what Carson believes.


... Carson might fairly be asked about his penchant to believe in extreme conspiracies and whether he truly fears a plot to criminalize Saturday worship and use state force to round up Seventh-day Adventists and others who don't wait until Sunday to commemorate the Sabbath. Carson, who has said present-day America "is very much like Nazi Germany," has forthrightly stated that he believes Satan has pushed the theory of evolution and embraced the notion that commies have secretly infested the schools, media, and government of the United States. If his dark vision of the world extends further, he probably ought to share it with the voters.

Would you vote for a bloke who believed this stuff?