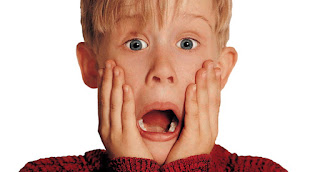 As a former teacher I'm used to proof reading. Without false humility I'm tempted to say I'm pretty good at it, without being overly pedantic in the awful Fowler's Modern English Usage sense. Provided it's someone else's text I'm checking; my own is another story.

The problem, as any writer, great or small, will tell you, is that one tends to read over one's own mistakes. The eye simply glides past, assuming that what you actually wrote is exactly what you meant in your head.

The best method of self-checking is to let a piece lie for a while, to the point where you've almost forgotten what you wrote. You come back to it fresh, and those stupid typos fairly leap off the screen (or the paper, if you're into ancient technologies) at you. Unfortunately the nature of blogging is about hitting the publish button right now - if not sooner.

Thankfully most blog readers are indulgent when it comes to this sort of thing. "Poor old Gavin," they think, "maybe he's been hitting the hooch again." Alas not, I'm too much of a self-control freak not to know my limits.

Unlike tweets, blog posts can, of course, be corrected. It's a rare thing that the first version of an Otagosh piece remains unaltered. Usually it gets finessed over the next hour - no so much corrected but re-edited. If you're picking this up as v.1.0 on something like Feedly, chances are v.3.9 is already up on the website.

Slight exaggeration, but not by much.

As you've probably guessed, this post is inspired by my latest typo, now scrubbed.

I guess, in the immortal words of somebody called Jarod Kintz, “There are two typos of people in this world: those who can edit and those who can’t.”