The Beck New Testament - the original

This is the fourth in a series on obscure Bible translations. I've restricted the candidates to those I've been able to personally acquire and examine. 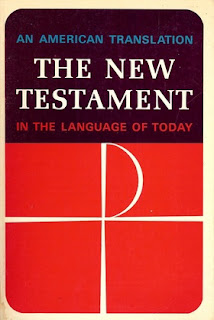 William F. Beck. The New Testament in the Language of Today (also known as An American Translation). Concordia, 1963.

I grew up with William F. Beck's The New Testament in the Language of Today. In fact it was the first modern language translation to take a place alongside the KJV in the family home. The reason was simple; Beck was a Missouri Synod pastor and his New Testament bore the hallowed Concordia imprint. Reason enough for it to be promoted in our Lutheran congregation.

These days I regard the Missouri Synod with jaundiced eyes, and view anything published by Concordia with deepest suspicion. But these were the 1960s, and the Seminex crisis was still on a distant horizon.

The thing is, Beck came up with something quite fresh and straightforward. It is certainly conservative, like its creator, but both simple and contemporary in language. It leans (sometimes heavily) toward a Lutheran understanding of key passages, but doesn't wear that bias on its sleeve.


Why, then, was the Law given? It was added to arouse transgressions until the Descendant would come to whom the promise was made. And it was given through angels in the hands of a mediator. A mediator deals with more than one, but God is one.

Beck's NT was expanded to include the Old Testament in 1976, noted for its "Christocentric" treatment of passages thought to be prophecies of Christ. Published posthumously, it was later to morph into the God's Word Translation, in the process shedding its identification with the Missouri Synod and Concordia and moving into the larger evangelical marketplace. In my view it suffered through a ham-fisted attempt at improvement.

Against my better judgement I'm still fond of the original Beck's NT. But to complicate matters there's another even more obscure Beck NT, and one that's very different from this one. That'll be next up in this series.