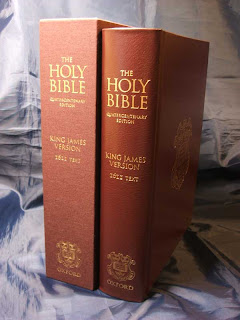 I decided to treat myself to something utterly frivolous to mark graduating with a degree in theology, especially seeing I wasn't able to travel down to Dunedin for the capping ceremony. Today I found the ideal thing, a facsimile edition of the 1611 King James Bible published by Oxford University Press to mark the 2011 Quatercentenary of the grand old dame of English literature.

It's a beautiful book, full of curiosities, and quite different in parts from the text of the KJV used today. To "dig in" one has to peel each of the gold-edged pages apart, a pleasure I'd long forgotten. The next surprise was the genealogy charts. Who cares who begat who? Apparently they cared a good deal back in the seventeenth century. If you ever need to nut out exactly how David is related to Jesus, it's all there in dubious detail, spread over two pages, with pages more in the introductory section charting the descendants of other worthies, such as Ephraim and Manasseh, and going as far as the text allows.

There are a few puzzlers for the twenty-first century reader, especially in the page headings and chapter descriptions. "Afke, feek, knocke" wasn't too hard (ask, seek, knock), but what on earth does "The harueft great" mean? Okay, you got there long before me: the harvest great. Alright, I can cope, but I've been teaching and proof reading too long not to be taken aback by the absence of the possessive apostrophe. Four hundred years later the irony is that there are those who want to take it out again. 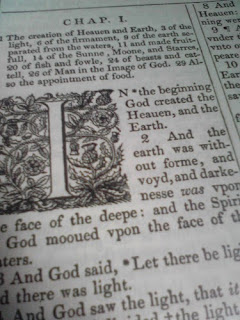 The strangeness of the English adds more than charm, it demands close reading and slows one down, the very opposite of the trashy 'easy-read' versions like The Message. Maybe it also conveys something of the distance that lies between us and the Greek and Hebrew documents. The original spelling edition of Tyndale's New Testament conveys that same feeling, and both are clearly meant to be read aloud rather than silently skimmed. The convention of printing the following word at the bottom of each page must have made the parson's job easier as he turned the leaf over without needing to pause.

Another feature is the inclusion of the Apocrypha. There, in the 1611 Bible, are the books that later disappeared from Protestant versions, including the KJV.

There are obviously more accurate translations available today, informed by current scholarship and better manuscripts, but arguably there are also a few that are worse (did I mention The Message?) But if you take pleasure in the sound and 'feel' of English, then "the 1611" is a pleasure unto itself, regardless of one's religious views or lack thereof.
Posted by Gavin R at 18:06