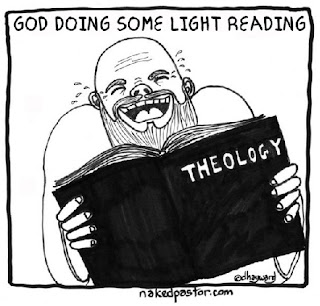 It's probably a rhetorical question, but let's put it up there anyway.

Why do so many theologians express themselves with opaque language?

You have to hand it to the conservative evangelicals, at least we know what they mean. Which is something of an Achilles' Heel I suspect. You know exactly what they're trying to say and, all too often, it's rubbish. But at least they know how to use plain English, and the reader can critique it - for better or for worse.

Not so the more philosophically minded theologians of the old school. They all too often finesse their language to the point of incoherence, so keen are they to draw out every meaningless nuance in their tortured argument. In the quest for profundity they crucify the language in the hope nobody will call their bluff.

Not everyone engaged in the more rarefied domains of the theological enterprise does this of course, but it's probably a sizable majority. To be clear, we're not talking about a concern for accuracy and integrity; those are non-negotiables in any field of enquiry. Nor are we talking about genuine biblical studies that set aside the waffle in the cause of actually understanding the ancient texts.

And lo, the contempt of the entitled theologian when confronted with that most abominable of things, a popular treatment of their area of expertise. A sudden intake of breath, snooters raised upward... three, two, one... sniff.

The lads (and only very occasionally a laddette) are not so much interested in engaging with the common herd as those in their circle of equally obscurantist peers. In the absence of anything solid to nail their deep and convoluted insights to, it all collapses over into philosophic confectionery - much as Shakespeare put it: it is a tale. Told by an idiot, full of sound and fury, Signifying nothing. (Macbeth, Act 5, Scene 5)

It's all too often a game of self-delusion, of castles built on clouds. A gathering of theologians to present papers to each other has all the relevance (but none of the panache) of a Star Trek convention - without the cool Vulcan ears and makeup.

Good theology is surely something else. Consider the parable.

Theology was once considered the queen of the sciences. So was astrology. The two are perhaps not unrelated. And perhaps the former is now going the way of the latter.

If so, these worthy individuals (with some honorable exceptions) have no-one to blame other than themselves.