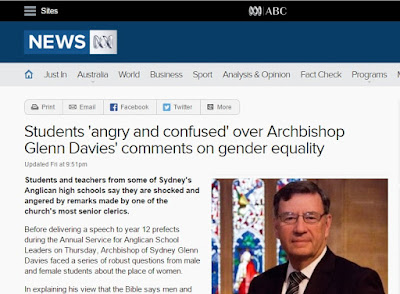 Fundamentalist churches are often rightly called into account over the way they devalue the role of women. But what about mainline churches like the dear old C of E? This story comes out of the Sydney, Australia Anglican diocese, widely regarded as a bastion of the denomination's evangelical wing.


"Students and teachers from some of Sydney's Anglican high schools say they are shocked and angered by remarks made by one of the church's most senior clerics.

"Before delivering a speech to year 12 prefects during the Annual Service for Anglican School Leaders on Thursday, Archbishop of Sydney Glenn Davies faced a series of robust questions from male and female students about the place of women.

"In explaining his view that the Bible says men and women have different roles in society and that God intended men to be the "heads" of women, many present believed he was saying women should not aspire to the same career heights as men."

Mr Davies apparently hasn't gotten the memo about living in the twenty-first century.


"A prefect at one of Sydney's most prestigious girls' schools, who declined to be identified because the students had been advised by their school not to speak to the media, said she and her friends were "angry" and "confused" that the Church was telling them the opposite message about gender equality to that told to them by their parents, educators and society in general.

"Another said: "We're trying as much as we can, and to be told that in the end we're not going to get there because of our gender? … It was disrespectful to us, as girls."

"When asked what Archbishop Davies said on gender equality, the students told The Drum that he told them the genders were equal, but the roles they inhabited were not.
"'We were told that men will make the decisions because men are regarded as having higher status and more power,'" one said.

"As some of the students returned to their schools voicing their confusion, principals spoke privately to The Drum about the need to "hose" down girls who were told to submit to men by church elders."

The young people are right. Davies seems to be on a one clergyperson crusade to make Christianity irrelevant in Australia.