Greg Albrecht and the Imaginary Mark 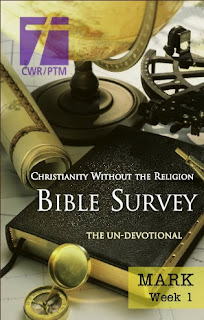 Greg Albrecht has set out to educate us all about Mark's gospel.


This Gospel was written by John Mark, the cousin of Barnabas. He is probably the young man who fled from the soldiers in Gethsemane (Mk 14:51-52)
Greg Albrecht, CWR Bible Survey, Mark, Week 1.


Think about Mark as a boy. He grew up in Jerusalem, the city of the holy Temple, central to Jewish history and religious practice. He probably followed Jesus, Peter and the other disciples through the streets of Jerusalem during the week of the events leading to the crucifixion. He may well have been the young man who escaped the Temple soldiers that fateful day (Mk 14:51-52).

Youthful experiences of Mark would have included knowledge of the early growth of the church, the gift of land by his cousin Barnabas to the church, the sermon and martyrdom of Stephen, and the conversion of the adversary Paul. He traveled with Paul and Barnabas to Cyprus and Asia Minor, but left to go home to Jerusalem, greatly upsetting Paul (Acts 13:13; 15:37-38).

Why did he leave? The Bible doesn't say. Perhaps he had family responsibilities, or a fiancee waiting for him. Perhaps he was homesick, traveling through unfamiliar lands far from home.

Whatever the case, Mark eventually decided to record the most important story ever written.

The problem is that most of this is pure invention. Greg is clearly a talented story-teller, but fiction rather than fact is his forte. We know very little about Mark. We can't be at all sure that he was the 'John Mark' written about elsewhere in the New Testament, and in fact it's fairly certain he wasn't! Here are some quotes from a few of the standard reference works that are readily available.


Like the other Gospels, the text does not identify its author, but early church tradition... attributed it to "Mark," a companion of Peter in Rome (1 Peter 5:13), who is then identified with the "John Mark" of Acts... This attribution is called into question by the apologetic desire to associate a nonapostolic Gospel with the apostle Peter, by the frequency of "Mark" as a name in the Roman Empire, and by the ancient tendency to attribute works to important figures from the past.
John R. Donahue, Mark, HarperCollins Bible Commentary.

About the author of the gospel we probably know very little. Ancient tradition calls him Mark, almost certainly intending to identify him with the John Mark mentioned elsewhere in the NT... None of this, however, is certain. It seems very unlikely, for example, that the author of the gospel was a Palestinian Jew. He appears to be rather ignorant about local geography (see Mk 5:1; 7:31), as well as about Jewish customs or laws (see Mk 7:3-4; 10:11-12). He may well have been called Mark, but the name was a very common one in the Roman empire and we cannot simply equate all the Marks we know!
C. M. Tuckett, Mark, Oxford Bible Commentary

Although the Gospel is anonymous, an ancient tradition ascribes it to John Mark (mentioned in Acts 12:12; 15:37), who is supposed to have composed it at Rome as his summary of Peter's preaching (see 1 Pet. 5:13). Modern scholars find little first-century evidence to support this tradition.
Richard Horsley, Introduction to Mark, The New Oxford Annotated Bible, NRSV, 4th edition

It seems those in-the-know know a good deal less about Mark than Greg does. A number of commentators (for example Paul Achtemeier in the Proclamation commentary series) largely ignore the issue of attribution given the dearth of real knowledge on the subject. Obviously Greg is unencumbered by any such reservations, which is okay as long as you bear in mind that he is primarily a spinner of yarns, an apologist more interested in flair than scholarship.

Not even informed by scholarship actually. Maybe he should take some classes...
Posted by Gavin R at 13:15