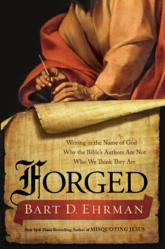 It's interesting to see the apologetics that gush forth when someone like Bart Ehrman publicises the pseudepigraphy of much of the New Testament, as in his latest book, Forged. Ehrman is never one to mince his words.


[G]ood Christian scholars of the Bible, including the top Protestant and Catholic scholars of America, will tell you that the Bible is full of lies, even if they refuse to use the term. And here is the truth: Many of the books of the New Testament were written by people who lied about their identity, claiming to be a famous apostle -- Peter, Paul or James -- knowing full well they were someone else. In modern parlance, that is a lie, and a book written by someone who lies about his identity is a forgery.

Now that's not exactly tactful, nor is it particularly charitable to the childlike sensibilities of those many people who have built their faith on the sands of fundamentalism. The relevant question, however, is: is Ehrman correct.

But, hang on, pseudepigraphy was OK back then, right?


Whoever wrote the New Testament book of 2 Peter claimed to be Peter. But scholars everywhere -- except for our friends among the fundamentalists -- will tell you that there is no way on God's green earth that Peter wrote the book. Someone else wrote it claiming to be Peter. Scholars may also tell you that it was an acceptable practice in the ancient world for someone to write a book in the name of someone else. But that is where they are wrong. If you look at what ancient people actually said about the practice, you'll see that they invariably called it lying and condemned it as a deceitful practice.

Now, I confess that I'm looking forward to Ehrman's discussion of this point. If he's correct - that writing as if you were someone else with the intention of being mistaken as that person was regarded as deceitful - then there's little else we can do than call those compositions fraudulent.

But naturally the defenders of the faith are already girding their loins and pounding their word processors. John Hobbins, responding to Ehrman, accuses him of "reverse fundamentalism."

I'm not sure what that means. Hobbins apparently wants a more nuanced method of judging the merits of pseudonymous literature. Good luck, I say, but be sure to apply the same generous standard to other works without fear or favour. 1 Enoch, for instance. 4 Maccabees, 3 Corinthians, the Shepherd of Hermas. Indeed, why not the Book of Mormon? A spot of name calling (reverse fundamentalist!) is, however, not a persuasive argument in itself.

Hobbins wants to draw a comparison to the attribution of various fables to Aesop. The logic of that evades me. If you tell your kids that the rhyme you've just recited comes from Mother Goose, that seems to be of an entirely different order to a religious authority figure informing the laity that Paul wrote 2 Timothy, that it's inspired, possibly inerrant, and you'd better study it on your knees.

And let's be honest for a moment, isn't that exactly what many of these "authorities" do? And not just the fundamentalists. The notes at the back of my copy of the ESV (which touts itself as a scholarly translation) clearly attribute the book to Paul ("This was the final letter written by Paul (A.D. 64-68) as he awaited execution in a Roman jail.")

A pseudonymous letter supported by a lying commentary. Shouldn't Hobbins be assailing the ESV editors instead of Ehrman?


Why are there no women priests in the Catholic Church? Why are women not allowed to preach in conservative evangelical churches? Why are there churches today that do not allow women even to speak? In no small measure it is because Paul allegedly taught that women had to be silent, submissive and pregnant. Except that the person who taught this was not Paul, but someone lying about his identity so that his readers would think he was Paul.

That's a fair point if 1 Timothy is, as everyone knows, Deutero-Pauline, i.e. a pious forgery. John Hobbins' response:


Ehrman’s argument depends on the specious assumption that the historical Paul was a feminist ante litteram who pushed against a society in which women were not expected to intervene in some public circumstances and could intervene in others; were expected to defer to their husbands in matters the culture thought of as male responsibilities; and were expected to bear children if they were able. Then a disciple of Paul’s came along and turned Paul on his head.

No, Ehrman's argument - at least that part of it in his column - is not dependent on any such thing. These verses have undeniably been used to relegate women to second-class status in the church, yet Hobbins' unjustified expansion of that fact is setting up a straw man by attributing to Ehrman a position which he does not argue.

Isn't it time to approach this issue honestly, minus wishful thinking, confessionalist posturing and apologetic obfuscation?
Posted by Gavin R at 20:14