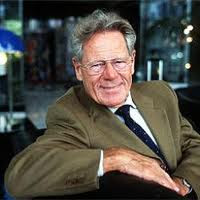 Hans Küng was one of the architects of Vatican II, and has remained a potent symbol of the path not taken by Catholicism. Now an octogenarian, he's still speaking as a prophet to his church.


"Controversial Swiss-born Catholic theologian Hans Kueng on Wednesday launched a new book attacking papal authority and calling on rank-and-file Catholics to seize control of the church from its clerical masters.

"The book Can the Church Still Be Saved? was set to go on sale in Germany Thursday, coinciding with the worldwide release of a book by Pope Benedict XVI titled Jesus of Nazareth - Part II.

"[T]he 82-year-old said Jesus Christ would not like today's Catholic Church... He charged that the curia, or Vatican bureaucracy, had come up with a long series of rulings over the centuries that opposed the teachings laid down in the Christian New Testament.
"In the book, he argues that resistance to church doctrines that are 'obviously against the Gospels' is a duty... He said the church could only saved by the faithful taking over responsibility for their church."
In an alternate universe somewhere, surely this man, not Ratzinger, sits on the throne of Peter.
Posted by Gavin R at 22:20