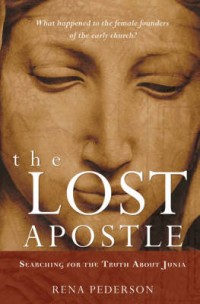 There is a curious text in Romans 16 (verse 7) that names a woman, Junia, among the apostles. It inspired Rena Pederson to write The Lost Apostle: Searching for the Truth About Junia. Unfortunately it seems to be out of print, but is still available in a Kindle edition. It's a good, sound, non-academic read. Bottom line: the text indicates that Junia (indisputably a woman's name) was, along with a bloke named Andronicus, "prominent among the apostles."

This of course is a problem for many of our more conservative brethren who wouldn't dream of ordaining a mere woman to the lowliest office of ministry, let alone as an apostle. Obviously there's been a mistake. Junia has accordingly been downgraded to a male by translations like the New Jerusalem Bible and the NIV, which re-brand her as "Junias", a male moniker. This is a textually dodgy move, so the evil English Standard Version (along with the NET Bible) performs surgery on the text to put the little lady in her rightful place. Now Junia keeps her gender but is merely "well known to the apostles."

Suzanne McCarthy has some interesting comments on the Junia passage on her blog, particularly on the attempt to suggest that the guys who were blessed with apostolic status were simply on first name basis with the good woman, presumably as she was serving them tea and cookies after all the important stuff was over. She concludes:


There is no chance that the apostles were only those to whom Andronicus and Junia were well-known, because there is no word which is parallel to "well-known" in the Greek. Ah well.

Romans 16:7 is a great "litmus text" to indicate whether the translation you're using is worth the paper it's printed on.
Posted by Gavin R at 00:00