The Lamingtons of Jeremiah

A passing reference to the Lamentations of Jeremiah the other day brought a quizzical enquiry from a youngster who was listening in on the conversation: "What are the lamingtons of Jeremiah?" 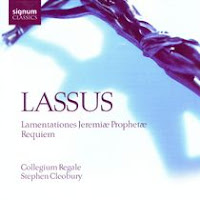 It's an understandable mistake for people in this part of the world, though I'm not sure whether these treats are as well known in the Northern Hemisphere. If you're curious, here's a recipe.

The lamentable conversation came about because I had earlier been waylaid by a recording of Lassus' The Lamentations of the Prophet Jeremiah which winked at me from the shelves at Marbecks. It is a simply beautiful piece of music for five unaccompanied voices, a memorable recording, and - for those so inclined - highly appropriate for Lent (when Lamentations is liturgically significant).

Which was how the subject of lamingtons came up a few days later. I suppose, if you were looking for something to give up for forty days, lamingtons wouldn't be a bad place to start...
Posted by Gavin R at 22:18