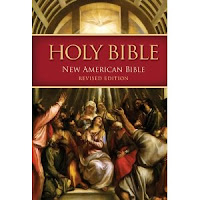 It's a big year for Bible aficionados, and here's the opening salvo. The American Catholic translation, the New American Bible, has been tweaked. Originally issued in 1970, the New Testament was revised in 1986 and the Psalms in 1991. Now it's the Old Testament - including Psalms - that gets a thorough going over. Outdated terms have been replaced with ones commonly in use ('holocaust' becomes 'burnt offering,' 'booty' becomes 'plunder'), and some inaccurate translation choices have been improved. This revised edition of the NAB will be referred to as the NABRE.

Nothing exciting there, you say? Not so. There's a tempest blowing because, with great integrity, the translators have changed Isaiah 7:14 to read "young woman" (Hebrew: almah) rather than "virgin." Back in January there was a rant on this very issue right here. It's encouraging to see the NABRE join with that other great Catholic translation, the New Jerusalem Bible, in putting accuracy above dogma.

But you don't mess with tradition without cost. A woman on Facebook protests "no, you don't change the Bible." I'd have thought that was the whole point, not to change almah (young woman) to virgin. While Jim West in generous in his praise of the NABRE, what do we make of the logic employed by Baptist pastor Peter Copeland? Pete seems to be concerned that the hoi polloi will forget that Isaiah 7 is a prophecy of Christ (which of course, it originally wasn't!) It's an interesting turn-about; a Baptist arguing that church tradition should trump the biblical text, while the Catholic bishops favour fidelity to scripture over tradition.

I guess even the Catholic bishops can't win them all...