The thread that runs through scripture 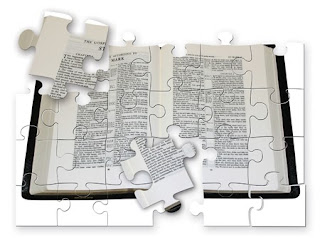 It's a problem. What do we do when different bits of the Bible contradict each other.

When I was a young bloke, it seemed all too clear. The Bible didn't contradict itself. If it seemed that way, it was because the Bible was God's jigsaw puzzle, and the wrong piece had been wodged in where it ought not be. So how should you interpret scripture so the pieces fit? I well recollect a be-three-piece-suited preacher eyeballing me and carefully stating, "we do not interpret the Bible, the Bible interprets itself."

Not that I said that at the time of course, but even a moron in a hurry knows that any act of reading requires interpretation. The preacher went on to intone that the difficult verses are interpreted in light of the clear ones.

Bollocks again. I mean, who decides which are the clear scriptures. The whole meaning of Romans, for example, changes depending on which verses concerning the law are 'clear.' Let's call a Royal Commission (or a Congressional Committee). Who to invite? A Latin American liberation theologian, some guy from Dallas Seminary, my old minister from Hawera Baptist church (hi Paul!), an Orthodox priest, Walter Brueggemann and Creflo Dollar. Now that'd be quite a discussion!

A variation on the theme popular among Lutherans, and popularised among Adventists by Bob Brinsmead (before he became a 'Christian Atheist'), has everything being "judged by the Gospel." This at least has the advantage of stepping away from bibliolatry, but raises the question: what exactly is the gospel. I think we'll need another committee...

Again, it comes back to how you perceive the Bible. Do we join the Calvinista in finding a grand narrative that wires the sixty-six books tightly together, an inspired thread of number eight fencing wire that binds Genesis to Revelation with everything sandwiched harmoniously in between? Or do we read each book as a document (or a compendium of documents like Isaiah, or a shuffled deck of cards like 2 Corinthians), a discrete entity with its own integrity, audience and assumptions? Holy hermeneutics! Do later books retrospectively interpret the earlier ones? Can a Jewish reader understand Leviticus without the aid of the helpful literature produced by the Banner of Truth Trust? What on earth is Amy-Jill Levine even thinking when she writes about the New Testament?

And which Bible do we mean by the Bible? There's a strong case to be made that the Septuagint is primary Christian scripture, not the Hebrew Bible (it was apparently good enough for Paul.) What about the Apocrypha? 1 Enoch? As for the New Testament, it must have been a confusing time before the not-so-saintly Athanasius tossed out his festal letter in 367.

367! Let's think about that for a moment. If the day of Pentecost had "fully come" back in 1970 instead of 30CE, we'd all be dead and gone before there was anything like a New Testament canon available. It's somewhat doubtful any of us will be here in 2307. That's a powerful-long wait.

I think I'm getting a headache.

Christians read the New Testament in the context of what John Henson (in Good as New) refers to as "the old books." Fair enough. We all build on earlier foundations. But does that mean those foundations are reinvented, redefined and recreated in the image of the superstructure? What if someone else (maybe several someone elses) has had the temerity to build on that same foundation?

I'm skeptical (or even sceptical, depending on your dictionary) about that disfiguring thread that some people want to ram through the pages of scripture. If it's there, maybe we should be reaching for a pair of wire cutters and setting the prisoners free.
Posted by Gavin R at 23:58