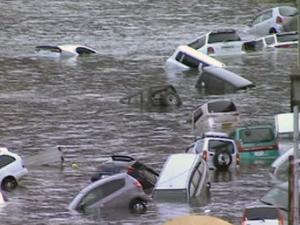 While the Christchurch earthquake has been off the international news radar for many days, in New Zealand it has continued to dominate news as the shattered city struggles to recover and the country as a whole counts the cost. Tonight the news of the extensive Japanese quake and tsunami, with live coverage from NHK, has hit a raw nerve. One headline announces that it has been the seventh largest earthquake in recorded history. Destruction in Japan - and potentially in neighbouring coastal nations like the Philippines - will dwarf the tragedies that have preoccupied our attention over the last weeks. The dramatic pictures tonight only hint at the human cost which will continue long after the aftershocks have abated.

What can one say that isn't facile? Much of the "God talk" after Christchurch was little more than platitudes. The raw power of nature forces us - even in our smug, sophisticated, technological age - into stunned silence.
Posted by Gavin R at 22:22