Tip of the fedora to Gary, who draws attention to an upcoming novel (by a former pastor's kid) called The Last Great Day. Benjamin Grant Mitchell is the son of a WCG minister, and there's probably enough disconcerting real history built into the plot to rattle more than a few cages. 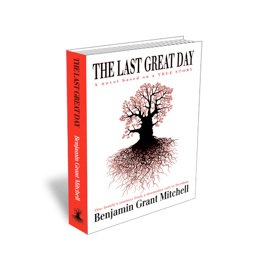 The author of THE LAST GREAT DAY, Benjamin Grant Mitchell, was born into a cult who believed the world was going to end sometime in the nineteen-seventies. Throughout his childhood his father was a minister in The Worldwide Church of God, an American based religion started by Herbert W. Armstrong, a former Oregon advertising man. The cult followed a mixture of religious beliefs including viewing medical assistance as unholy. As a result Benjamin’s Aunty and baby twin brothers died in otherwise preventable circumstances.

When prophecies for the End Time repeatedly failed, the Mitchell family moved to church headquarters in Pasadena, California, discovering rumours of sexual and financial corruption were well founded. Despite having no savings or home to return to (the cult paid rent and minimal wages), and knowing his family would be isolated from friends and extended family, Minister Mitchell resigned. On the way back to Australia, Benjamin turned ten in Hawaii, and although the cult banned celebrating birthdays, it was a notable milestone for the Mitchell’s, who began life for the first time free of the influence of a deluded megalomaniac.

THE LAST GREAT DAY is based on actual events including ex-members and friends of church leaders reporting child abuse at the highest ranks. It is set during the most tumultuous period of the cult’s existence, culminating when hundreds of thousands of members from around the world learned (via a 60 Minutes USA exposé), the Californian government was investigating the church for fraud. This turned out to be the beginning of the end —  not of the world, as Armstrong had falsely predicted for years —  but for his cult. (source)

I can't find much in the way of detail - it seems to be self published - but will link to further info as it becomes available. Release date is some time in April. Fans of Aussie soaps may be interested to know that - according to Wikipedia - Ben has starred as a regular on the TV series Neighbours.
Posted by Gavin R at 17:54