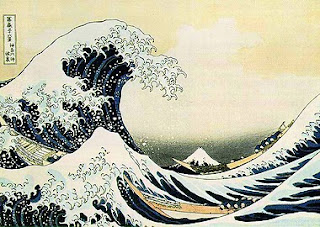 Some of us are used to "Christian" leaders finding the punitive hand of God in natural disasters. God is angry with us. We have been very naughty. We are getting grief because our sins have grieved God.

It's pretty childish - literally. Small children often blame themselves for bad things that happen in their lives. Adults reassure them, "this wasn't your fault."

Then along come spiritual retards like Pat Robertson and Rod Meredith who proclaim, "yes, yes indeed, it is all your fault."

Strangely enough, this isn't just a Christian problem. In the wake of the Japanese earthquake, tsunami and the resulting nuclear crisis, the same old guilt trip is being laid on the victims there: 'decrees from heaven meted out to a people whose Confucian morality had become corrupt or simply lax; or the Mahayana Buddhist version of the traditional “end times” scenario. Mappo, the “Age of Decline,” was thought to have occurred because the dharma—the teachings of the Buddha—had been allowed to languish and grow stale.'


"[T]he most widely publicized religious response to the nation’s worst disaster since the Second World War comes from within Japan itself—a series of comments made by 79-year-old Tokyo Governor, Shintaro Ishihara... On March 14, just three days into the crisis, Ishihara told reporters that he saw the tsunami as “divine punishment,” or tenbatsu, a term usually employed in Japanese to describe a righteous and inevitable punishment of the wicked. For Ishihara, the tsunami produced by Japan’s largest-ever recorded earthquake was a means of washing away the “egoism” (gayoku in Japanese) afflicting the Japanese people."
The quotes come from two separate articles at Religion Dispatches, here and here.

Perhaps it's not surprising that, confronted with tragedy on a scale that makes a mockery of all our puny plans and skills, we are thrown back on childhood dependence and a need to find an adequate cause - a personal or corporate flaw - to make sense of our suffering. Ishihara's comments can at least be understood in that light. Less so the manipulators, control freaks and pedlars who seek to exploit our fears as a permanent fulcrum for their apocalyptic theology, an inhuman and juvenile interpretative device to understand the world - even in everyday existence.
Posted by Gavin R at 23:00