Camping it up in Auckland 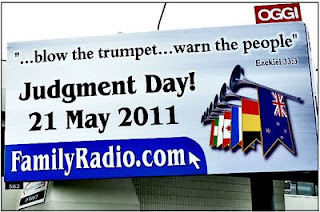 It's not just crazy Americans who have joined the not-so-happy campers predicting a May 21 Judgment Day, as mentioned in the previous blog entry. Lo, local zombie fundamentalists are putting up a Kiwi version of the Camping billboards in New Zealand cities too.

(Though, to be a bit pedantic, it isn't really a Kiwi billboard if they're spelling it as 'judgment' instead of 'judgement'.)

So what happens when May 22 dawns? Disillusionment, backpedaling or a creative reinterpretation?

Will Camping admit to being a gormless jerk?

Will the billboards disappear the night before?

Will Family Radio splutter out static then disappear off the airwaves?

I daresay that's hoping for too much.
Posted by Gavin R at 20:10