Which Bible to choose? 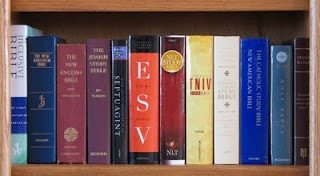 Most Christians have a favourite Bible translation. In Australia, for example, the big sellers, trouncing all opposition, are the NIV, the King James, and the New KJV.

But are they the best? There's a fallacy that confuses popularity with merit, but as every true music aficionado knows, it ain't necessarily so, or Justin Bieber and Lady Gaga would represent the finest accomplishments of the human spirit.

Enter Fuller Theological Seminary. They've just upped the number of English language translations approved for use in their biblical studies courses from two to three. Now, prediction time: Which versions do you think they've picked?

Okay, yes the first hurdle is to work out what all those acronyms stand for. If you identified the lot without breaking out into a sweat take a fifteen point bonus before proceeding, or one point for each you identified.

So the solution to the question? Fuller had previously approved the New Revised Standard Version and Today's New International Version, which is a nicely balanced move considering the institution's demographic. Not the NIV, which is interesting. Just this month they added a third "as a translation for use in biblical studies courses for its more than 4,000 students, and particularly for all master's-level instruction in the seminary's School of Theology, School of Psychology, and School of Intercultural Studies on all eight of its campuses."

Hands up if you suspected it might be the ESV?

It's a good choice simply because breadth of scholarship ensures greater objectivity and honesty than many agenda-driven popular versions, and the already released NT appears to demonstrate that point. The complete Common English Bible is due to hit the presses in August.  In the meantime there are free downloads available of Genesis, Psalms, Matthew and Luke.
Posted by Gavin R at 08:37