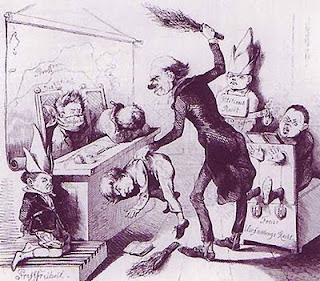 Tom Verenna draws attention to a post by John Byron wherein John lists eight things not found in the Bible which your average pew potato might be surprised by. Some are innocuous (nowhere does it say there were three Wise Men.) But coming down the list we find this:


Spare the rod and spoil the child

Well... what about the book of Sirach?

Sirach is in the Septuagint, which was the first Bible of the emerging Christian movement. It might not be in Byron's minimalist Protestant version, but it's large as life in the Catholic and Orthodox canons.


3 It is a disgrace to be the father of an undisciplined son,
and the birth of a daughter is a loss.
4 A sensible daughter obtains a husband of her own,
but one who acts shamefully is a grief to her father.
5 An impudent daughter disgraces father and husband,
and is despised by both.
6 Like music in time of mourning is ill-timed conversation,
but a thrashing and discipline are at all times wisdom. (Sirach 22)

Daughters take note! But, you might protest, there's nothing here about spoiling a child by failing to administer a beating. Try chapter 30.


1 He who loves his son will whip him often,
so that he may rejoice at the way he turns out.
2 He who disciplines his son will profit by him,
and will boast of him among acquaintances.
3 He who teaches his son will make his enemies envious,
and will glory in him among his friends.
4 When the father dies he will not seem to be dead,
for he has left behind him one like himself,
5 whom in his life he looked upon with joy
and at death, without grief.
6 He has left behind him an avenger against his enemies,
and one to repay the kindness of his friends.


7 Whoever spoils his son will bind up his wounds,
and will suffer heartache at every cry.
8 An unbroken horse turns out stubborn,
and an unchecked son turns out headstrong.
9 Pamper a child, and he will terrorize you;
play with him, and he will grieve you.
10 Do not laugh with him, or you will have sorrow with him,
and in the end you will gnash your teeth.
11 Give him no freedom in his youth,
and do not ignore his errors.
12 Bow down his neck in his youth,
and beat his sides while he is young,
or else he will become stubborn and disobey you,
and you will have sorrow of soul from him.
13 Discipline your son and make his yoke heavy,
so that you may not be offended by his shamelessness.

So there you have it. The Bible's guide to child-rearing according to the most ancient Christian canon in existence. And what a wretched guide it is.

Quotations from the NRSV. Sirach is also known as Ecclesiasticus and the Wisdom of Sirach (or Ben Sira), depending on the translator's mood.
Posted by Gavin R at 17:27