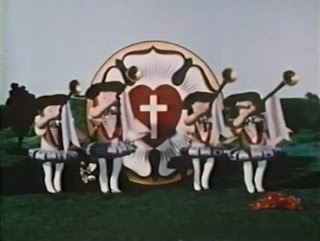 Over at Remnants of Giants Deane has posted a 13 minute episode ("All Alone?") from Davey and Goliath, an early claymation-type kiddie show produced circa 1960 by the then United Lutheran Church which, a couple of mergers later, is now incorporated into the ELCA.

The show is deep-dish apple pie middle-America, but the opening sequence is what grabbed my attention. A Luther Rose, medieval-style trumpeters and an adaptation of Ein feste Burg as theme music. Too cool!
Posted by Gavin R at 19:37