Several bloggers have sniffed disdainfully at the attention Harold Camping and his rapture prediction have received. Bad enough "the media" have been caught up (if you'll forgive a rather weak pun) in it all; we, the enlightened, are being sidelined by circuses!

Nope. The media attention and the howls of delight from the cheap seats are much needed.

It isn't as though this hasn't happened before and, here's the issue, will happen again.

And each time decent, sincere, largely naive people get sucked in. Lives are affected. Later I want to share some observations on the demographic Camping preyed on, but let's be clear: Most of those folk with their placards are victims. They don't need to have their noses rubbed in their mistakes.

Camping, on the other hand, should serve as an abiding lesson for any who might follow in his wake.

Deane Galbraith makes a very pertinent point: "But can we write off Harold Camping as occupying the fringe regions of Christianity when some 55% of Americans believe in The Rapture, a concept which was only popularized as late as the nineteenth century by dispensationalist, John Darby?"

No, Camping shares the same loon rating as Hal Lindsey, Tim LaHaye and the entire faculty of Dallas Theological Seminary.

These people may represent a majority (isn't 55% a majority) viewpoint!

A disdainful sniff is hardly the response that's needed.

PS. Just in case you were still wondering, the other side of zero is... nothing! 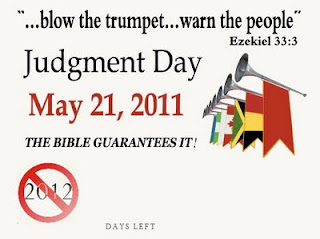