Two Peas in a Pod? 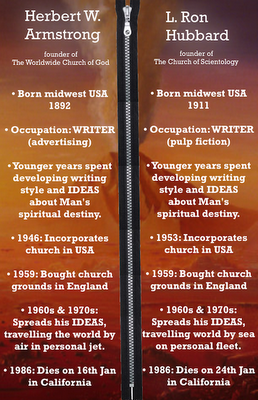 I hadn't seen this graphic before it appeared on Ben Mitchell's blog, but it's worth sharing. Mitchell is the author of an upcoming "autobiographical account" of his family's involvement in Herb Armstrong's religious empire.

I especially enjoyed his earlier post entitled "Mad magazine artist co-founded The Worldwide Church of God." To clarify, it wasn't that Basil Wolverton (the magazine artist) was mad, but that he produced his finest work for "Alfred E. Neuman" (the magazine 'Mad').


Mad magazine illustrator and comic artist Basil Wolverton co-founded The Worldwide Church of God, when in 1946, as an Elder for the fledgling cult, he signed the Californian corporation papers for the then named ‘Radio Church of God’. In 1956, Wolverton illustrated the horror of the End Time in a booklet produced by Herbert W. Armstrong called 1975 in Prophecy, in which Armstrong wrote of the coming apocalypse.

I've never heard Basil described as a co-founder before, but I guess the description is fair enough. Mad magazine and The Plain Truth? Well, honestly there wasn't all that much difference. Tomorrow's World and Cracked!  The more I think about it...

A confession: I loved Wolverton's artwork, including the blood-curdling 'End Time' scenes. Then again, many (most?) of those who spent the tender years of childhood with Basil's bizarre fear-inducing artwork have a justifiably less appreciative perspective.