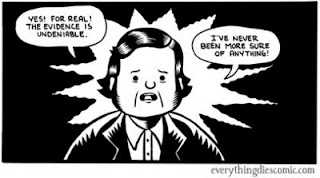 Harold Camping is the William Miller of the early twenty first century.

Miller had a couple of flubs before hitting on October 22 1844. The faithful were "ready to rise" on April 18, and there had been a previous expectation a year before that.

Recalculations were made, and the date was adjusted. It didn't make any difference of course.

Miller seems to have been a sincere man. Can we say the same of Camping? Is it even faintly defensible for anyone today to build a doomsday doctrine based on the symbolic numbers in ancient texts, Hebrew, Greek or Mayan for that matter? Miller thought so, but he had few of the advantages available to those of us living today. Even a moron in a hurry now knows the Bible can't be read aside from some basic critical qualifications, just ask Al Mohler.

And Camping had the clear example of Miller's failure, along with a host of similar predictions since.

Now he's adopted the Miller strategy: He made a bit of a mistake by failing to factor in x. But no worries, it's still all good. And land-sakes, he's even come up with an October date! The 21st!

Unlike 1844, when it took time to spread "the good word" of the End, today news is communicated as it happens. Miller's final prediction is the one we all remember. But Camping has fired his cannon early, and the whole world heard it. His supporters have already spent their savings on billboards for the wrong date.

Miller was merely self-deluded; Camping is a fool.
Posted by Gavin R at 07:10