Winds of Change at CoG7

If anything is a "mother church" to the squabbling sects that remain from the dissolution of the Worldwide Church of God, it has to be CoG7, the Denver-based Church of God (Seventh Day).

CoG7 (or CG7, whichever acronym you prefer) is an enduring remnant of the movement that also produced the Seventh-day Adventist church. The SDAs went forth to become the multi-million member denomination that brought us corn flakes and Ben Carson. CoG7 settled for a more modest trajectory.

CoG7 has had its own issues over the years, but it would be fair to say that they've been settled without a fraction of the melodrama that characterises its bickering daughter churches. Today, just as they did during Herbert Armstrong's early ministry, they still publish The Bible Advocate magazine.

The church is now seeing new leadership emerge. Loren Stacey is the new president of the General Conference following the retirement of Whaid Rose, and Jason Overman has become editor of the BA after Calvin Burrell's many years at the helm. A smooth and peaceful transition? Imagine that! 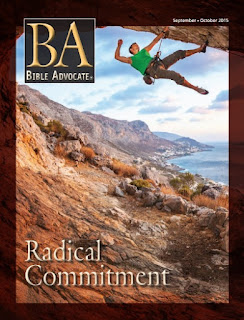 CoG7 is a fundamentalist Sabbatarian body, it's true, and I expect that would be reason enough for many of us to not take it seriously. But it also demonstrates an openness and accountability that stands in marked contrast to similar and related groups many readers of this blog will be more familiar with. Without an authoritarian top-down structure it provided what could have been a benign and unifying model for the re-structuring of the post-Armstrong WCG. That the Tkach cabal chose to ignore that option and instead pretend to have some kind of "episcopal" form of government is perhaps the most damning indictment of the so-called reforms that eventually led to its re-branding as Grace Communion International.

In his "State of the Church Address" at the recent General Conference, outgoing president Whaid Rose reflected back on the denomination as it was in 1998 (he was appointed in '97).

Rose's retirement should, one would hope, not go unnoticed by Joe Tkach, who should have stepped aside years ago. One doubts he will take the hint though, and there's little indication that he has put in place a workable transition plan.

There have been times in the past when CoG7 must have felt upstaged by its precocious offspring. In the end however it has demonstrated the staying power that has eluded its desperately troubled daughters and granddaughters.