McGrath on the Akedah

The Akedah is the incident involving Abraham, Isaac and a lethal knife. James McGrath makes some worthwhile observations. 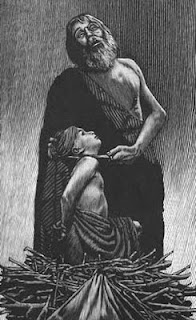 Isn’t it time to stop attempting to harmonize what’s in the Bible, and allow that greatest of Biblical principles, the Golden Rule, to trump, invalidate, and expose as wrong those parts of the Bible that run counter to it? If we ask “What would Jesus do?”, surely the evidence from the sayings attributed to him in the New Testament suggest that he would allow one passage to override another, just as he allowed humanitarian concerns to take priority over the command to rest on the sabbath. Shouldn’t those who wish to call themselves Jesus’ followers approach the Bible in the same way?