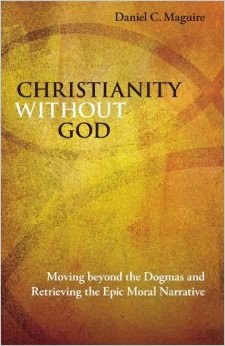 I first referenced Daniel Maguire's work on ethics back in 2009, then posted a YouTube clip in 2011. At the time I was trying to rinse the taste of Reformed ethics out of my mouth, a legacy of taking a couple of very inadequate courses in that subject at Otago while in pursuit of my B.Theol. Maguire appealed on at least two levels. First, as a Roman Catholic his arguments weren't poisoned by deviant Calvinist assumptions. Second, he addressed issues directly, not beating around the apologetic bush. I admired then (and still do) his brilliant little book A Moral Creed for All Christians which I've described elsewhere as "worth a truckload of Reformed gnat-straining."

Today I learned that this troublesome priest has outed himself as - shock, horror - an atheist.

In an interview with Religion Dispatches he talks about his new book Christianity Without God (also the provocative title of an earlier book by Lloyd Geering) and makes some memorable remarks.


"I think the main passion of the conservative mind is fear... Fear makes you reach for a supernatural insurance policy."

Unlike all too many of those who have transitioned from various forms of Christianity to godlessness, Maguire retains the ability to engage in the conversation without the smug, tone deaf invective that shuts off communication rather than opening it up.


"I grew up in a household with four sons and three of us became priests. That’s part of my story and its still part of my thinking. My moral creed for all Christians does not require belief in a god; there’s a whole cultural development that’s very dependent on Judaism and it’s something that I treasure. Many of my sensitivities are still rooted in that tradition."

And it's for that very reason I think this might be an invaluable contribution to the discourse, moving beyond the barricades and the cheap 'talking points' that characterises the all too common sniping from the cheap seats. Hopefully an e-book edition will be released before too much longer.